The twenty mile stretch of the Taylor River between Taylor Dam and Almont is has been rising as added releases from the dam are needed to mitigate what little run-off is occurring.  The lower Taylor is currently running clear at 388 cfs.  While there have been a fair number of fly anglers on the river, it will really ramp up when Memorial Day gets here next weekend.  Rafting traffic, which bothers most fly anglers more than it pesters the Taylor’s fish, will really ramp up next week as well.

The fishing has been very good, with blue-winged olives hatching most afternoons, especially if some cloud cover or precipitation encourages them.  While fish can be coaxed to the surface with both a Mathews’ BWO Sparkle Dun and Craven’s Mole Fly, nymphing has been the most effective technique to catch trout.  I’ve caught fish in the last week on Barr’s Beadhead BWO Emerger, Mercer’s Mayfly, Rainbow Warrior, and a purple Craven’s JujuBaetis.  I’ve been using a Pat’s Rubberlegs as my first fly with one of the aforementioned BWO imitations as a dropper with extremely good success.  If it happens to be sprinkling or sleeting, head up to the C&R as BIG 'bows and browns have been rising to olives with reckless abandon.  You certainly don't want to miss the opportunity to catch some of the Gunnison Country's biggest fish on dry flies.

In the increased flow, the fish are exactly where you’d expect them, which is in slothful pocket water, shallow bank water, eddies, and any semi-deep slow water slicks.  Try to make a good cast to good slow or medium paced water along the far bank because the increased flow keeps fly rodders from crossing the river and much of the quality water on the far side of the river hasn’t seen many flies and many of the fish residing there have been unmolested for a few weeks.  If you don’t much care for nymphing, do not let your heart be troubled…dry fly season with begin in earnest any day now. 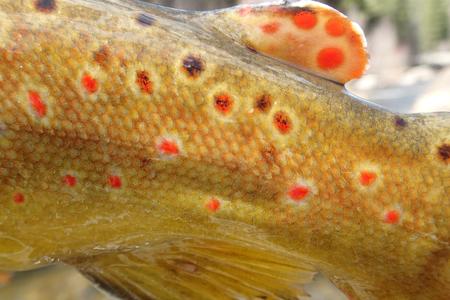 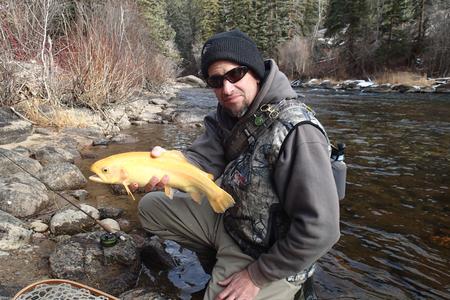