Thank you for your interest in Fly Fishing the Gunnison Country! Doug will be in contact with you soon.

Doug Dillingham has been blessed to live in the Gunnison Country for 15 years and unfurl his fly line on its rivers, streams, and high lakes for almost 2 decades.  Earning a degree in biology from Kansas State University, he launched his career as a freelance outdoor writer in 2006, with numerous features appearing in Bowhunter and Bowhunt America magazines.  The author 's musings have also been featured in Fly Fisherman, Southwest Fly Fishing, and Colorado Outdoors magazines.  He has invested literally thousands of hours over the last 10 years researching, photographing, and writing about the fly waters of the Gunnison Basin, culminating in the release of Fly Fishing the Gunnison Country in 2016.  Doug makes his home in Ohio City, Colorado with his 5 children and wonderful wife, Gail. 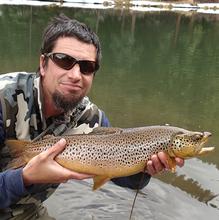