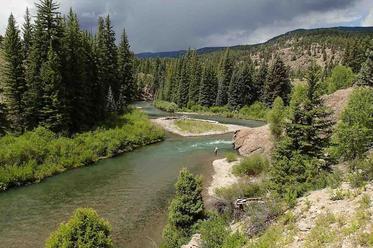 I had the good fortune of being able to get away from the grind a couple of days ago and go angle my favorite river in Colorado...the Lake Fork of the Gunnison River.  If you’ve not had a chance to fly fish on the Lake Fork it has all the ingredients that come together to make any trout stream great…supermodel stunning scenery, robust hatches, big fish potential, and it is normally not super crowded.   The Lake Fork was running a bit higher than I like at 418 cfs but the color was Gunny Green, which is perfect.  I threw a #10 brown/black Pat's Rubberlegs trailed with a #16 Prince Nymph all day long...never had to change. My son threw a Royal Stimulator and a Parachute Adams all day and probably outfished me, although I hooked up with more big fish. Dry flies did not catch a ton of fish early in the morning, but by afternoon fish were rising well for them.  Although I didn’t need to get too creative with flies, normally I’ll drop either a BH Flashback Pheasant Tail, Barr’s BH PMD Emerger, or BH Prince Nymph off of a stonefly nymph of some sort and do really well this time of year, so this trip was no exception.

For a summer day the river was relatively uncrowded and we fished the Thomas Ranch, above and below the bridge at High Bridge, Big Bend, Big Eddy, and in Lake City at the confluence with Henson Creek, catching several dozen fish with the biggest being a 17" rainbow. Unfortunately, I got broke off (ran out of 4x and had to use 5x) about half a dozen times on big fish, which is about 6 more times than usual if I'm using 4x.  5x tippit is a little bit wimpy for this fly water and I would highly recommend using 4x on most days.  Aside from getting humiliated by several big fish, once again, the Lake Fork of the Gunnison River showed why it is absolutely the Centennial State’s most undeservingly unheralded trout stream.  There is a reason why for many area guides, the Lake Fork is where they want to go fish on their rare days off.  What an awesome fishery!

A much prolonged run-off and recent major rain events have kept the Lake Forks flow above 400 cfs much longer than usual this summer, but once the monsoonal moisture subsides and the Lake Fork drops into the 300 cfs range look for fly fishing to improve and become even better than it is now…and just so you are clear, it is pretty amazing right now! 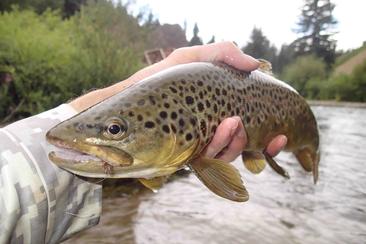