The big and brawling runoff season is finally on the wane and the small trout streams in the Gunnison Basin are fishing as well as they will fish all year long.  The Gunnison Country is blessed to be home to several uber-productive creeks , with a few of the best being  Cochetopa, Los Pinos, Saguache, Tomichi, Pauline, Fall, Cebolla, Ruby Anthracite and Anthracite Creeks.  Some Gunnison Valley creeks host a surprising number of different species of trout, including the tiger trout pictured above, which I caught on a local creek about a week ago.  Catching a tiger trout is always epic and there are a few locales in the Gunny Basin where you have a legit chance to find one.  However, you are going to have to purchase the guidebook to learn where you can find a tiger trout or two, as some information is just too valuable to let go to just anyone.  Other creeks host rare populations of wild rainbows, which have amazingly managed to thrive despite the ravages of whirling disease which have decimated rainbow populations across Colorado.  If a small creek has wild ‘bows they are normally some of the biggest and hardest fighting small stream trout you’ll catch all year, so I love to target small creeks that are replete with a self-sustaining population of wild rainbow trout.

Currently, hatches of caddisflies, pale morning duns, red quills, green drakes and several species of stoneflies are keeping Gunnison Valley small stream trout looking up and gorging themselves while prey is abundant.  While on occasion you may need to nymph in the cool of the morning on certain small streams, most notably Tomichi Creek, big dries such as a #12-14 Royal Stimulator, Royal Wulff, Parachute Adams, or Chubby Chernobyl will normally get the job done 9 times out of 10.  If you get refusals on your large dry, downsize a size or two and most likely…problem solved.


Many fly aficionados like to employ a dry/dropper rig on diminutive fly waters this time of year, but I’ve come to prefer dead-drifting a small streamer instead.  A small streamer provides anglers with one huge advantage on creeks over a dry/dropper, namely it affords you the ability to swing your fly underneath undercut banks, which is consistently where the biggest of the small stream trout will likely be lurking.  Virtually all of my largest small stream trout are lured out from deep within an undercut bank, normally at a bend pool, with a leech pattern on the swing.  Simply position yourself on the stream bank opposite of the undercut and cast your small streamer above the undercut and as close to the bank as possible.  Let the fly dead-drift and be ready as the current carries your fly underneath the bank at the bend.  And note, there are often a surprising number of good sized fish within a small area underneath an undercut bank.  If you capture one, there are often several more targets nearby, especially on creeks where ‘bows are present.  My two favorite flies for this technique are a brown #16 Mayer’s Mini Leech (which is pictured above) and a #10 McCannel’s Hot Head Leech (which I obtain from RIGS Fly Shop in Ridgway, although one of the fly shops located closer to Gunnison may have them, but I’m not sure.)  Kindly drop me an email if you know of a more local shop that stocks either of these leeches!  Whatever you do don’t waste the next 8 magical weeks of fly angling in the backcountry of the Gunnison Basin because the fly fishing is tremendous throughout the Gunnison Country right now . 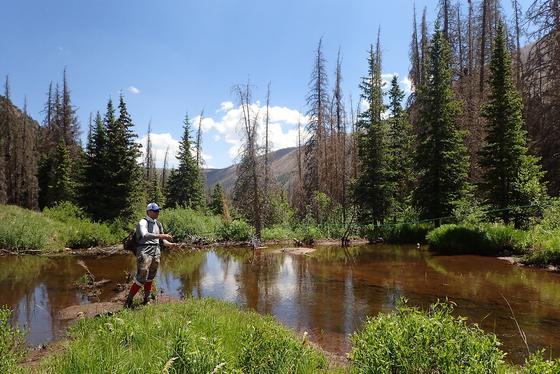 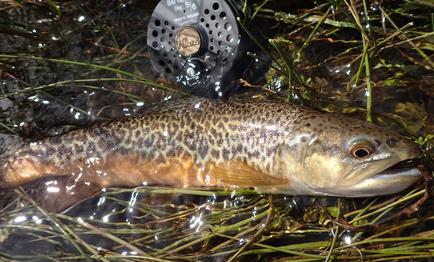 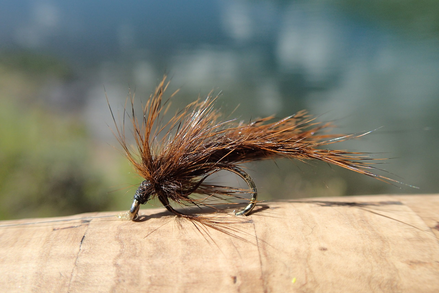